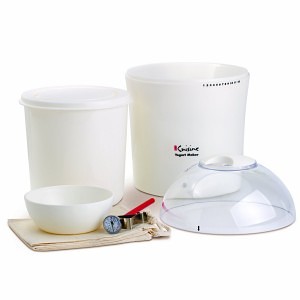 Euro Cuisine YM260 yogurt maker is for those who love yogurt and are ready to try creating the homemade variety. It has a 2 quart capacity and a timer on the side so you can know when the process is finished. The YM260 comes as part of a kit, which also includes a specially designed cotton bag for making cheese, a stainless steel thermometer and a serving bowl. This appliance comes with a 3 year warranty. It is priced at around $40, but does it represent good value for money?

A full list of the features of the YM260

The YM260 is generally met with very positive reviews, as you can see from Amazon, where it has averaged out to a 4 star review (out of five) which is very respectable, especially for something on the cheaper end of the market in comparison to the more “deluxe” models. This does hold its own when compared to many of its more expensive competitors.

For the health conscious, homemade yogurt is a healthier option than commercial yogurt. Commercial yogurts come with artificial flavors, added sugar and preservatives. One also controls what goes into homemade yogurt. There are endless flavor options and the consistency, amount of fat and the sweetness are controlled by the user. Soy milk and coconut milk are also options, offering an alternative for those who can’t consume cow’s milk. One of the benefits of yogurt is that it contains probiotics, which promote good gut bacteria and help to boost the immune system. Those who are lactose intolerant can also often consume yogurt, as the live cultures that it contains feed on the lactose. Commercial yogurt tends to have less of these, it can sit on the shelf a long time before it goes bad. The probiotics gradually die off during this time. With homemade yogurt, enough is generally made to last up to ten days. A fresh batch can be made regularly and at less than the cost of buying commercial yogurt. Yogurt in general is also beneficial for the amount of calcium that it contains. The protein it contains is good for helping to repair muscle cells, especially for those who lead very active lifestyles. Studies have also shown that it is beneficial in preventing high blood pressure.

The timer on the YM260 is not a true timer in the sense of that on a microwave. Rather it is a reminder, consisting of the numbers from 1 to 12 on the side of the base. The lid has an arrow on it that points to the time that the unit should be shut off by the user. It also does not have an on and off switch. The unit is turned on by plugging it in, which may not help if the plug is in an awkward place as the mixture should not be moved during its cycle until it ends.

The YM260 is a  good yogurt maker for those interested in making their yogurt at home. It is not as convenient as some other brands, as it does not have a built in thermometer or a real timer, nor an on/off switch. That said, it is cheaper than many of the options on the market, and does offer good value considering the features it has for the money spent – it is a good purchase and I give it a 4 out of 5 as a yogurt maker.